Education and machine design since 1901

Institute of Machine and Industrial Design has a long history dating back to 1901. At that time Leopold Grimm was named a full professor of Machine Elements Design and Machine Design I at newly established Czech Technical University in Brno. Czech Technical University was established in 1899 as a result of the demand of the Czech people for an own university where education would be provided in Czech language. The beginnings were humble. Lack of facilities, funds, professors and students was compensated by enthusiasm. In the course of time, the Institute has been renamed and changed its location for several times. Seven directors have been in charge and they all contributed to the fact that the Institute of Machine and Industrial Design is now well-known and respected engineering school.

Martin Hartl was born in 1967 in Brno. After passing Secondary Technical School of Mechanical Engineering in Brno, he graduated with honours in Design of Production Machines and Equipment at the Faculty of Mechanical Engineering of Brno University of Technology. In 1993 he was awarded by the Minister of Education, Youth and Sports of the Czech Republic “Talent 92” prize for remarkable achievements in the research during his Ph.D. study. In 1997 he earned Ph.D. degree. In 2002 he was named docent (equal to associate professor) and in 2003 he was appointed professor of Design and Process Engineering. In 2003 Prof. Hartl was named director of the Institute of Machine and Industrial Design. He led organizational transformation of the Institute and modernized teaching methods. His research is focused on tribology, especially on elastohydrodynamics and mixed lubrication. Prof. Hartl and Prof. Křupka developed an optical method for measurement of very thin lubricant films (colorimetric interferometry) which is used all over the world. In 1999 he was a visiting professor at the Institut National des Sciences Appliquées (INSA). He was also visiting researcher at other foreign universities, above all in China and Japan. Prof. Hartl was head of team of translators and scientific editorial board (with doc. Ing. Miloš Vlk, CSc.) of Czech translation of the publication Shigley, Joseph E.; Mischke, Charles R.; Budynas, Richard G. Mechanical engineering design.

Josef Šupák was born in 1941 in Hodonín. He worked first as a designer in the Výzkumný ústav pro valivá ložiska v Brně (Research Institute for Rolling Bearings in Brno) then as a senior lecturer at the Department of Machine Elements at the Military Technical Academy in Brno. In 1975 he joined Brno University of Technology. In 1983 he got a doctor's degree (at that time title CSc. was equivalent to Ph.D.). In 1988 he was named docent (equal to associate professor) of Machine Elements and Mechanisms. In 1990-1993 Šupák was a director of the Department of Machine Elements and Mechanisms. In 2003 this Department was transformed into Institute of Machine and Industrial Design and Josef Šupák was named it's director. At that time were established new degree programmes Industrial Design and Computer Aided Machine Design.

Dušan Kolář was born in 1941 in Uherské Hradiště. After finishing secondary school in 1959, he started to work for the company LET Kunovice. Kolář graduated with a degree at the Faculty of Mechanical Engineering of the University of Mechanical and Textile Engineering in Liberec. He worked there as an assistant professor for two years since 1963. In 1965-1968 he worked in the company ČKD Hradec Králové which produced diesel engines. At the beginning he was a mechanical assembly engineer and a test engineer then he became a deputy head of the head of operations and testing room. In 1968 he came to Brno and started to work as a researcher at the Department of General Engineering and Machine Elements at the Brno University of Technology. In 1980 he got a doctor's degree (at that time title CSc. was equivalent to Ph.D.) in the field of maschine elements and mechanisms. In 1981 he got the title of docent (equal to associate professor). In 1986-1990 he was a director of the Department of Machine Elements and Mechanisms. Besides other things Kolář established the laboratory of contact fatigue. His research was focused on reliability, service life and rating life of machine elements and tribology. He was also solving problems in industry, especially in energy industry and production of rolling bearings. In 1985-1989 he was a vice-dean for foreign relations, foreign students, dormitories, scholarships and postgraduates. 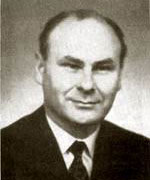 František Boháček was born in 1924 in Želatice near Kyjov. During the war he was forced to work as a designer in the company ZKL Brno. After graduating with a degree in engineering at Brno University of Technology, he started to work in a research laboratory of the company ZKL Brno. In 1954-1962 he was a researcher in Výzkumný ústav pro valivá ložiska v Brně (Research Institute for rolling bearings in Brno). In 1962 Boháček started to work at the Department of General Engineering and Machine Elements. In 1973 he was appointed a director of this department when he replaced Prof. Němec. His research interest included location of rolling elements and tribology. Boháček established laboratories of tribology. He recieved 13 patents and was a member of international committee ISO/TC4 Rolling bearings. In 1970-1976 he was vice-dean for scientific and research activities.

Antonín Němec was born in 1906 in Martínkov. In 1924-1930 he studied at the Department of Mechanical Engineering of the Czech Technical University in Brno. After finishing his studies, he worked for two years as an assistant of Prof. Zvoníček and Prof. Křivánek in Brno. Then he became head of design of aircraft and internal combustion engines in the company Zbrojovka Brno. There he made V14 aircraft diesel two-stroke engine which was world-wide unique. During the war he was subject to forced labor. After the war Němec worked as a teacher at Vyšší průmyslová škola strojnická (Higher Technical School) in Brno. In 1949 he was awarded the title of Professor of Maschine Elements at the Czech Technical University in Brno. He already lectured there on engineering drawing from 1945 to 1949. In 1949-1951 he was a director of the Department of General Engineering and Machine Elements at the Technical University in Brno. In 1951 the University ceased to exist. Some parts were transferred to the newly established Military Technical Academy and Prof. Němec was appointed the head of the Department of Machine Elements and Engineering Basics there. Already in 1956 the university activity was gradually restored under the present name Brno University of Technology and Prof. Němec was once again from 1958 to 1973 a director of the Department of General Engineering and Machine Elements. With other significant technicians like Prof. Bolek or academician Kožešník he contributed to the founding of the field of science “maschine elements and theory of mechanisms” with a right to award academic degrees. He was the dean of the Faculty of Mechanical Engineering for six years. On 14th June 1971 Němec was decorated for “excellent work” with a Medal for Labour. He was also given the Golden Medal from the Czech Technical University in Prague.

Jan Kieswetter was born in 1879 in Krašovice (near Pilsner). He studied at the the Section of Mechanical Engineering at the School of Mechanical and Electrical Engineering in Prague. After finishing his studies, Kieswetter started to work as a designer in the Steam Turbines Department of the company První českomoravská továrna na stroje in Prague. In 1905 he was assigned to work for a few months with Prof. Jan Zvoníček. He helped him to design his radial steam turbine. After Zvoníček's turbines became obsolete he continued designing new impulse and radial turbines. Kieswetter spent wartime (1914-1919) in trenches on Italian Front. In 1919 he started to work for Škoda Works in Pilsner where he was first head of steam turbines department and then the director. Kieswetter retired in 1933, hovewer he continued cooperating with Škoda Works. At that time, he accepted offer from the Czech Technical University in Brno to teach there. Kieswetter was named a professor of Machine Design I by the decree from 31st October 1933 and took charge of the Institute of Machine Design I which he managed till 1949. Prof. Kieswetter was an excellent technician. He focused on steam turbines and recieved 65 patents which were basis for production of steam turbines in Škoda Works. He was also interested in water turbines and recieved several patents in this field. Prof. Kieswetter was world-wide respected. He kept in touch with significant personalities of his field like Prof. Stodola in Zurich or Prof. Thoma in Munich.

Leopold Grimm was born in 1862 in Všebořice near Ústí nad Labem. He passed secondary school (k. k. Czech Realschule) in Prague with honours. In 1886 he graduated at ETH Zurich (Swiss Federal Institute of Technology in Zurich) with a degree in mechanical engineering. After finishing his studies, Grimm worked for one year in the company Breitfeld, Daněk and co. in Prague. Then he come back to ETH Zurich where he worked for two years as an assistant professor at the Department of Mechanics and Maschine Design. In the second year he even lectured on his own on course in maschine design. Next two years (1889-1891) he spent at the company Escher, Wyss and co. in Zurich. In 1891-1894 Grimm worked as a chief designer for the company F. Fosi in Legnano in Italy. Then he returned home and started to work for the company Ruston and co. in Prague first as a chief engineer then as a head of the department. Grimm spent there almost six years (1894-1900). In 1900 he was employed by the company J. M. Voith in Heidenheim in Germany. This company was one of the leading in the field of mechine design in Germany. In 1901 Grimm was named a full professor of Machine Elements Design and Machine Design I at the Czech Technical University in Brno by the decree from 29th October. He lectured on machine elements, hydraulic machines and cranes. Grimm was one of the founders of the science of machine design in Czechoslovakia. His research interest pertained to hydraulic machines and pumps. Grimm established the best laboratory of hydraulic machines in the Czechoslovakia and had a considerable influence on construction of hydraulic structures at that time. He designed pumps for mills and water turbines for power stations. He also recognised the importance of the invention of his colleague from German Technical University in Brno Prof. Viktor Kaplan on which he wrote positive review. During 1907 and 1908 he was a rector of the Czech Technical University in Brno and in 1917-1918 and 1924-1925 a dean of the Department of Mechanical and Electrical Engineering. When he retired at the age of seventy he had to continue working for one more year because there was nobody to replace him. Finally, in the school year 1933/34 Jan Kieswetter, the director of Škoda Works in Pilsner, was named the head of the Institute of Machine Design I. Prof. Grimm died in Brno on 23rd April 1939.